What You Need To Know About Steam Treatments For Bed Bugs In The Philadelphia, PA Area

If you are located in the Philadelphia, PA area there is a good chance that you have heard about the recent outbreak of bed bugs. While these bugs are making an impact all over the world, they seem to have really hit the Philadelphia area hard. They might not carry diseases, but they are nasty and they bite. Plus, they can also cause a lot of mental anguish. In fact, they have impacted some individuals so badly that they have just up and moved from their homes entirely.

Unfortunately, this might not be a viable option for everyone and this is exactly where out Philadelphia steam treatments can come in handy. Not only are they cost effective, but also they are completely efficient with the ability to remove entire infestations.

Why would residents in the Philadelphia area want to choose steam treatments to eliminate their bed bug problem when they can use chemicals and pesticides? Well, the truth of the matter is that bed bugs are growing more and more resilient to the chemicals and pesticides that used to be so effective at killing them off. In addition to this, chemicals and pesticides cannot penetrate certain areas. Steam not only kills instantly. Also, it is emitted in a vapor. This gives it the ability to travel behind walls, in electrical outlets, behind baseboards, and other hard to reach places that the alternatives might leave behind.

Along with this certain chemicals and pesticides can be dangerous to you, your pets, and your children. While there are some dangers associated with steamers, the treatment itself is completely free of toxins. In fact, you don’t even have to vacate the home when the treatment is applied.

Don’t Attempt To Steam Yourself

It is true that anyone can run out and purchase a steamer. While this might seem like the smart investment you might just be causing yourself more heartache in the process. Steamers emit a water vapor that comes out of a nozzle at temperatures over 180 degrees F. This extreme heat can do major damage to certain surface if you aren’t careful. Plus, if you don’t know exactly where the bugs are there is a good chance that you are going to miss some or you might just end up spreading the infestation to other parts of the home. In the end this is a job that is best left to our team of highly trained professionals. 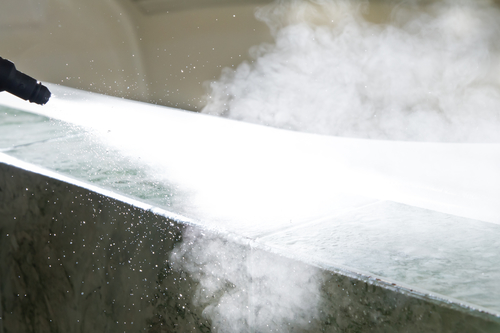